This enviable record of steady growth proves the robustness of Australia’s economy and its reliability as a low-risk and safe environment in which to do business. 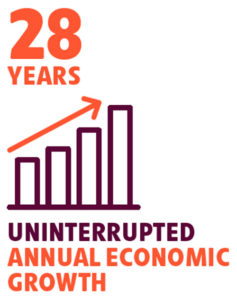 Charts from the Benchmark Report.

The Australia Benchmark Report provides rich data demonstrating why there is no better place than Australia to do business. The report examines five key reasons for investing in Australia – Robust Economy, Dynamic Industries, Innovation and Skills, Global Ties and Strong Foundations – and compares Australia’s credentials with other countries.

Charts can be downloaded and saved as images for use in reports and presentations (when using please reference www.austrade.gov.in)

Australia is the only major developed economy to have recorded no annual recessions from 1992 to 2018.